Call for Papers: The Confidential Clerk

The Confidential Clerk (ISSN 2454-6100), an open-access and peer-reviewed journal of the Centre for Victorian Studies, Jadavpur University, seeks contributions for its 2018 issue.

In Retrospect: Ellis Bell, Emily Bronte and their Wuthering Heights

Like some of the Romantic poets earlier in the nineteenth century, Emily Bronte died young (1818-1848), having published her only novel (Wuthering Heights, 1847) and a slim volume of poems that also contained the poems of her two surviving sisters (Poems by Curer, Ellis, and Acton Bell, 1846).  The pseudonyms adopted by the sisters while publishing the volume of poems extended to the publication of their novels. Hence the progenitor of Wuthering Heights was Ellis Bell and Emily Bronte died without any book to her name. All this play with the authorship of Wuthering Heights resulted in a curious publication history as it also engendered an ambivalent critical response. The Athenaeum pronounced the Wuthering Heights a ‘disagreeable story’ even while it acknowledged its ‘power and cleverness’ and its ‘truth to life in the remote nooks and corners of England.’ The Examiner professed it a ‘strange book’ though ‘not without evidences of considerable power.’ There were many negative reviews even though a number of reviewers acknowledged that Ellis Bell’s work bore a ‘colossal’ promise and it evidently suffered in comparison to Curer Bell’s Jane Eyre which was very favourably received. However, there was a shift in the reception of the novel after the publication of Charlotte Bronte’s “Biographical Notice” in the new edition of Wuthering Heights (1850) which, for the first time, publicly identified Emily Bronte as Ellis Bell. A new set of reviewers showed themselves to be more sensitive to the extent of Emily’s achievement.

There is now a rich oeuvre of critical writings on Wuthering Heights though disagreements between the critics abound. While Lord David Cecil proposes a theory that presents the novel as a unified whole, J Hillis Miller challenges this assumption. Mark Schorer argues that it is one of the most carefully constructed novels in the English language which is contradicted by Albert J Guerard who reads occasional loss of authorial control in the brilliant but imperfect novel. There are socio-economic readings of the work by Marxist critics like Terry Eagleton while scholars like Ellen Moers have provided powerful feminist readings of the work. Indeed the text and its publication and reception history offer the possibility of a broad spectrum of readings across the theoretical domains, a challenge that has been taken up by many scholars of Victorian Studies.

On the occasion of the bicentenary of her birth we will be dedicating the 2018 issue of The Confidential Clerk to Emily Bronte and the Wuthering Heights and we invite your papers for the same. The papers may examine but need not be limited to:

We invite college and university professionals, independent researchers and research scholars to submit abstracts of about 500 words to cvs.journal@gmail.com, by 10 February 2018. A brief bio-note (50-70 words) about the author, his/her affiliation and contact details should also be attached to the mail.

Entries are accepted both in English and Bengali.

Please note that abstracts should be submitted through email only, and queries may be directed to the same address.

Authors whose abstracts have been selected, will be notified by 28 February 2018, via email.

Papers should be styled in the MLA-7 format, double-spaced, and in Times New Roman (Font size: 12).

You can download this document here: Call for Papers (Vol.4) 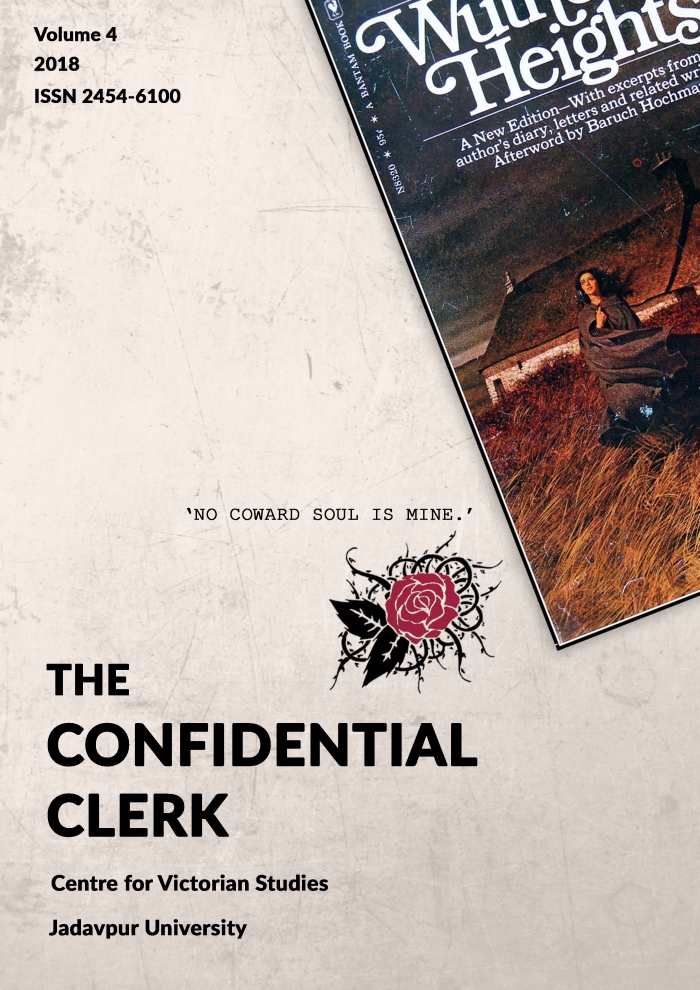